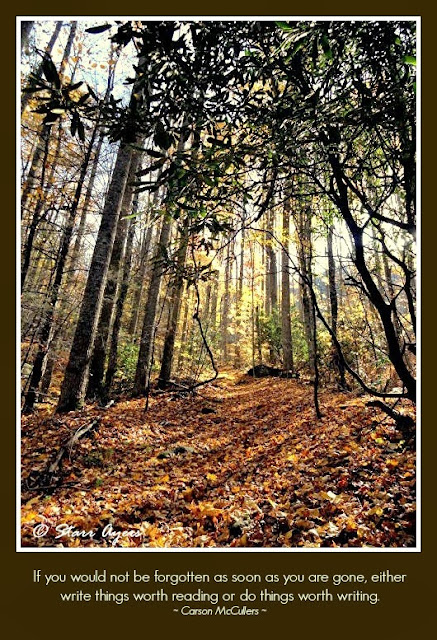 The Heart is a Lonely Hunter, a 1968 movie based on Carson McCuller's acclaimed debut novel, was one of the first movies my husband and I went to see while dating.

Carson, a transplanted Georgia girl, finished her 1940  novel while living in Fayetteville, North Carolina. My mother worked as a young waitress there at the time and happened to live in the same boarding house where Carson and her husband rented a room. I remember my mother speaking of Carson's eccentric ways and of the fact that she dressed in boyish clothes, wore a man's watch, smoked and didn't hesitate to befriend blacks, which was frowned upon in the segregated South.

Fayetteville residents had no clue this eccentric young  woman was about to become what publishers considered the "find of the decade."
Carson McCullers
February 19, 1917 ~ September 29, 1967
Columbus, Georgia

"I live with the people I create and it has always made
my essential loneliness less keen."


Carson McCullers, born Lula Carson Smith, was plagued with poor health for more than half of her life. A child musical genius, she began her formal training in piano at the age of ten. By thirteen, her passion was to become a concert pianist, but her intensive study was interrupted at the age of seventeen with a prolonged illness which would later be diagnosed as rheumatic fever. Too weak to play the piano, her father gave her a typewriter and she began writing plays that she cast, directed and produced at home before an audience of family and friends. 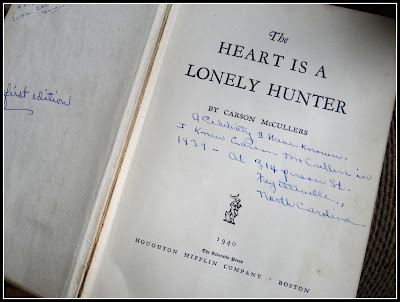 Though an ordinary student in high school, she was a prolific reader. She reasoned that to read was to prepare to be a writer, and where better to read and learn to write than in New York City. Convincing her mother she wanted to prepare for a concert career at Juilliard School of Music, she arrived in Manhattan during the grips of the Great Depression. In the evenings, she studied creative writing at Columbia University and New York University for two years while taking odd jobs to support herself and pay tuition. She was fired from time to time for daydreaming. Her study was regularly interrupted by respiratory ailments related to her still undiagnosed rheumatic fever. She often returned home to recuperate. It was on one such trip she met a Fort Benning soldier from Alabama, Reeves McCullers. They were married in 1937 and later moved to Charlotte, North Carolina where she worked on her manuscript for The Heart is a Lonely Hunter. With an outline and six chapters, she entered a fiction writing contest sponsored by Houghton Mifflin and was awarded a $500 prize as an advance against royalties and the promise of publication if her work proved satisfactory. In 1938, her husband was transferred to Fayetteville, North Carolina, and it was there she finished her debut novel. She was living in Fayetteville when The Heart is a Lonely Hunter was accepted for publication and released in 1940.
Carson suffered three 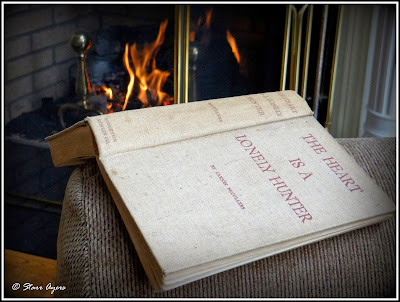 crippling strokes before she was thirty, yet managed to write daily. In 1941, she completed her second novel, Reflections in a Golden Eye, but it was her third novel, The Member of the Wedding (1946), that was considered to be her finest work. Adapted for theater, it won most of the theater awards in 1950 and ran for 501 performances on Broadway. Her fourth and final novel, Clock without Hands (1961), climbed to sixth place on the New York Times best-seller list. Carson continued to write dozens of non-fiction essays, short stories, plays and poems leaving an impressive literary legacy before she died in 1967 of a massive brain tumor at the age of fifty. A movie based on The Heart is a Lonely Hunter was released the following year.