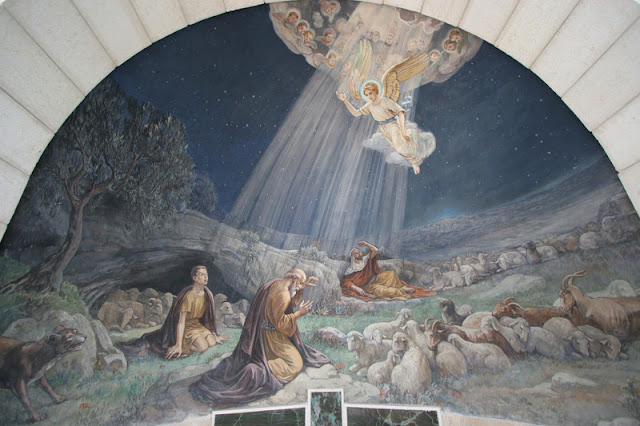 After seeing him, the shepherds told everyone what had happened
and what the angel had said to them about this child.
—Luke 2:17, NIV


I only had one line, but I executed it well. Standing as tall as a preschooler could stand, I looked out across the crowd of adoring parents and friends packed into the small chapel. This was my moment—my opportunity to shine—to share in the proclamation of the news of the birth of the baby Jesus.
“While shepherds washed their sheets by night….”
Oops!
Not exactly the message I was expected to convey, but a message I spoke with delight and with words that certainly brought joy to the faces of everyone who heard them.

This morning as I was reading the Christmas story in Luke, I was reminded that God first entrusted the good news of his son’s birth to men in the lowliest of professions—shepherds—men who camped out in fields and tended dirty sheep. Men looked upon as the most despised of all mankind.
We can only speculate as to why God chose to entrust this earth-shaking news to a few lowly men on a hillside in Judea. If I’d written the script, I’m sure I would’ve chosen a much more flamboyant conclave of men who could prove themselves worthy of bearing such life-altering news.
But God got it right. And thankfully, so did the shepherds. Over two-thousand years later, we’re still talking about the birth of our Savior, Jesus Christ.  As I read the story of Jesus’s birth in Luke 2:8-20, I found there were lessons to be learned from this unsuspecting band of uneducated men.
·         They were nearby.

o   The shepherds held the lowliest of all positions, but they were positioned to hear a revelation that would awaken a nation.

§  We should position ourselves to hear the words of our Heavenly Father—words that will awaken our hearts and impact our lives and subsequently the lives of others.
·         They kept watch.

o   The shepherds faithfully carried out their duty to protect the sheep that were in their care. They were alert and prepared to handle whatever took place on their watch.

§  We should live in expectation as we faithfully prepare and carry out the tasks that God has assigned to us.
·         They hurried off and saw him.

o   “Let’s go to Bethlehem and see.” Though terrified, the shepherds were moved to action. They sought confirmation and desired to witness the Truth for themselves.

§  In spite of our fears, we should move without hesitation to confirm the truth. Doing it afraid, if necessary. We shouldn’t settle for second-hand information but should witness the truth for ourselves.
·         They spread the word.

o   The shepherds were the first evangelists. Shepherds were considered untrustworthy and so despised that their testimony wasn’t even allowed in court. But miraculously on this night, when they shared the Truth without reservation, all that heard it were amazed.

§  We should understand that we are all valuable to God and have a story to tell. We are responsible to share the truth about God without reservation. God, alone, is responsible for how others receive it. Trust him.
·         They returned glorifying and praising God.

o   Elated, the shepherds returned to the fields with a new sense of purpose and worth, and the realization that God is who he says he is.