Welcome to Friday Friendly Focus. It is my privilege this week to feature, Eddie Jones.
Eddie is a gifted writer, author and acquisition editor for Lighthouse Publishing of the Carolinas. He is co-founder of Writers Advance Boot Camp and the online devotional site, Christian Devotions. Eddie gives unselfishly of his time and resources  so others can realize their dreams and spread the love of God through writing.
Grab a cup o' joe, kick back and enjoy  his delightful humor in this excerpt from one of his many books, Hard Aground, Again.  If you've never sailed, Eddie's adventures will either cause you to wish you had or be glad you haven't. Either way, Eddie, thank you for helping us see how a little laughter goes a long way in relieving the stress of life.
Enjoy!
Oscar Mired Dinners
by Eddie Jones
For ten dollars we got one of the finest seafood dinners the Low country could offer and an evening of entertainment that has lasted a lifetime. 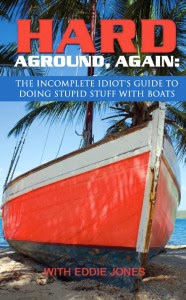 Lin was the navigator, and it was his job to keep us clear of the shoals and mud flats of Georgia’s Sea Islands. Our passage up the Intracoastal Waterway from Jacksonville, Florida, had been plagued by swift currents, slow days, and the gradual acceptance that life around these sea islands moved with the ebb and flow of the tidal times. Fish and fowl and boat all moved along to the same slow pulse of the gravitational pull.

Our adventure had begun earlier that morning with the wind ripping through the sun-dried sawgrass of a tidal marsh, thrashing the restless reeds in advance of a summer squall. The morning blossomed with the passing shower, and soon the narrow river swelled beyond the channel markers, washing over oyster beds and cautious crabs in a relentless march for the high-tide line. Somewhere up ahead, beyond the next turn or the one after that, was a fork in the waterway called Hell’s Gate. Rick’s dad, Oscar, had warned us to stay alert for this navigational nightmare and to watch for the set of range markers. The symbolism of the topography and the mischief we would propose should have been a harbinger of things to come, but we were young and stupid and blinded by our faith in two forgiving fathers — Rick’s dad and my heavenly one.

In Rick’s case, his dad was down below mulling over the waterway charts and making plans for another dull meal aboard ship. I didn’t know it at the time — but was about to learn — that Oscar had this thing about Dinty Moore beef stew. He considered this canned hash to be an integral part of the cruising experience. All I could envision was the regurgitated heap of cold beef hash from my days as a Boy Scout. I hoped Oscar’s loud boasting of fresh stew was for show and to scare us, but Rick assured me it was not.

“My old man loves the stuff,” he said.

“You’re kidding. How can he eat something that looks and smells like canned dog food?”

“Oh, it’s not so bad if you add a little wine to it,” Rick offered. “The trick is to drown it thoroughly in merlot while Dad’s out in the cockpit checking the channel markers. If you doctor it up enough, by the time you’ve finished a bowl you’ve got a little buzz and are tempted to go back for seconds. But don’t let that wine high fool you. Stop at one helping or you’ll pay for it in the morning.”

Well, I had never had a beef stew hangover and didn’t care to try one that far from central plumbing, so I asked Rick if there was another option.

“Crabs?” I asked. “You mean like stopping for a crab dinner along the waterway?”

“No, I mean like grabbing one of these traps we keep passing and boiling a few.”

“I’m not sure. It’s hard to guess which way he’ll come down on something like that. But right now it’s crabs or Dinty Moore and I’m willing to try a little larceny if y’all are.”

Like I said, Lin and I figured Rick had a better feel for his dad’s temperament than we did, so we found a false sense of security in Rick’s courage.

Along the Southern coast, locals still set shrimp nets and crab traps in small creeks and tidal pools, preserving a way of life that is fighting to stay ahead of the kudzu creep of four-lane causeways and back-nine bunkers. Motoring north along the waterway, we tried to ignore the rumble of rubber tires on steel girders overhead, because off to port a broad savanna stretched beyond the back lawn of a plantation home.

“Do you think we’re close to Hell’s Gate?” I asked as the channel narrowed.

“Not sure,” Rick replied. “We’ll know for certain when we get to the next marker.”

None of us had thought to check the tide, but then no one had considered the penalty for poaching crabs either. As accomplished sinners we didn’t need to be led into temptation. We could find it on our own just fine. While Lin and Rick gathered their tools for our evening heist, Oscar was down below banging on a steel pan to warn us that preparations for dinner were underway. Together we clung to the hope that soon the Styrofoam float we craved so desperately would drift into view and spare us another dull meal aboard Oscar’s boat. What had begun as a lukewarm alliance to poaching crabs now possessed our very soul, and we were rabid with the prospect of a fresh seafood dinner.

“It’s tough when you want to steal and can’t,” Rick mumbled after a few minutes of searching the dusk-darkened waters.

Just as Oscar announced that he’d found the can opener, Lin’s light illuminated a beige float bobbing off the port side. Rick rushed forward to get into position while I carefully steered us away from the main channel and towards dinner. I was reluctant to throttle down for fear of alerting Oscar of our intentions, so I watched and waited and hoped our brief diversion from course would go unnoticed. Rick knelt down, wedging his head beneath the lifelines to lie flat on the narrow side deck. I was watching Rick reach over and down towards the water to snag the trap, when suddenly I saw Lin twist and stumble on the bow, his thigh landing hard against the bow pulpit. I only had a moment to wonder at this before I, too, succumbed to a rush of vertigo as the cockpit floor rose beneath me in that sickening manner that accompanies a grounding.

“What’s going on up there?” Oscar shouted, charging up the companionway. “I thought I told you guys to call me if you weren’t sure where the channel was.”

He was standing in the cockpit with a half-opened can of Dinty Moore in one hand and a plastic spatula in the other.

“Rick, you should know better than this. Rick? Where’s Rick?”

We looked off the stern and saw Rick standing in the water beside the dinghy.

“What are you doing down there, son?”

“Well, if you can stand up, then you know dang well this isn’t where the boat’s supposed to be. Get in the dinghy and take the anchor out into the main channel. Eddie, you get ready to winch it in. Y’all better pray that the tide is rising.”

I learned that night that the secret to life is enjoying the passing of tides. It’s a hard lesson to learn. You learn it on a shoal or you learn it bucking a current, but in the end you come to appreciate the power of the tides. It is the eternal flow of highs and lows that sets the pace of life. Fish and fowl and fair-weather sailors all float along on the same river of ups and downs.

We convinced Oscar that since we’d gone to the trouble of running aground, we might as well enjoy a crab feast. Rick pulled the chicken-wire cage on board and we dumped ten or more of the frightened critters into a pot of boiling water. I was pleased to see that their spastic convulsions stopped almost as soon as they hit the water. Moments later we were sitting around the table dipping chucks of beefy white meat into bowls of golden butter and listening to Oscar’s tales of other waterway trips. The stories and crabs kept coming, each nourishing us in different ways, and when we were finished Oscar added another to his collection.

“Y’all chip in a few dollars while I write a note.”

We glanced at each other, puzzled at his request, but did as ordered. Oscar went into the head and dug through his dock kit and returned with an aspirin bottle. He emptied the pills on the counter, then rolled the money and note together and slipped them into the bottle.

“I plan to be gone tomorrow morning when that fisherman comes back for his trap. He’s gonna be pretty ticked off to find it’s empty except for this aspirin bottle. Ten dollars ain’t much, but maybe it will make up for what we took. Could be it’s more than he would’ve made off them anyway. In any case, these crabs and this grounding will give us something to talk about the rest of the trip.”

And it still does.

Hard Aground...Again is a collection of cruising and boating stories, offering a "stuck up" look at the underside of cruising and the frustrations “land-cuffed” sailors experience when our plans for coastal exploration and tropical destinations run aground on the shoals of family, finances and failing health. It is available for purchase through Amazon in paperback or Kindle edition. http://www.amazon.com/dp/B00A6B0AOO/

Eddie is a North Carolina-based writer and Acquisition Editor for Lighthouse Publishing of the Carolinas. He is also an award-winning author with HarperCollins. Learn more about Eddie at EddieJones.org
Posted by Starr Ayers at 12:01 AM