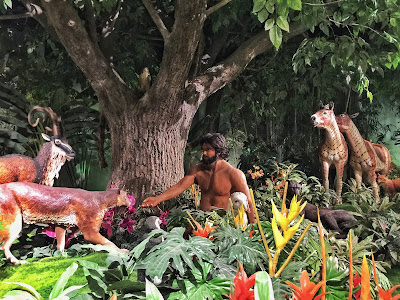 “In the beginning, God created the heavens and the earth.”
Genesis 1:1, ESV

My husband and I recently visited the Creation Museum in Northern Kentucky as well as the Ark Encounter, its sister attraction.  As we strolled through biblical history, we observed man’s amazing interpretation of God’s original creation—a picturesque universe—vast, unspoiled, and serene.

Genesis 1 conveys how God spoke the world into existence in six days. At the end of each day he looked over all he’d fashioned and “saw that it was good.”

Sadly, it’s impossible for God to observe today’s world and say it’s good. Thanks to the first man, Adam, and his lady, Eve, life in a perfect world is no longer an option. In fact, our world’s corrupt condition bears little resemblance to its idyllic beginning.

As an artist, I can't imagine placing my finished work, my masterpiece, into the hands of a small child. A child who has no appreciation for the time, heart, and emotion I’ve invested into the creation process. However, God did exactly that. The Master Artist crowned humanity with his glory and entrusted the work of his fingers into our hands—hands of mere children.

Am I a faithful steward of his creation and the days he's entrusted to me? Are you? As we stand on the threshold of a new year can we look back over 2016 and say it was good?

America just weathered the nastiest election season in our nation’s history. I dare say all of us, irrespective of our party affiliation, would eagerly shout with one resounding voice, “good riddance” to 2016. But let’s look at the year from a personal perspective.

Perhaps you’ve experienced blessings that far outweigh your sorrow. For you, releasing the year to an unknown future is difficult. For others who’ve experienced great sadness, personal tragedy, and loss, you’re more than happy to bid a hardy farewell to the last 365 days.

None of us know what 2017 has in store, but its days spread out before us like a primed canvas. Unspoiled by human touch, it offers us the hope of a brand new start. How can we be faithful with the time God’s allotted to us and use it for his glory?

In 1 Corinthians 3, the Apostle Paul communicates that a builder must be careful how he builds. “No man can lay a foundation other than the one which is laid, which is Jesus Christ” (v.11).

If we establish 2017 on the sure foundation of Christ, we’ll be able to look back at the end of the year and say, “It was good because in the beginning, God. . .

Oh, that I would trust him as much as he trusts me.

Now it's your turn. What is one aspiration you hope to initiate for "good" in the new year?

** This article was first published in Thrive magazine, January 2017