SUNDAY SOLACE: Do You Believe? 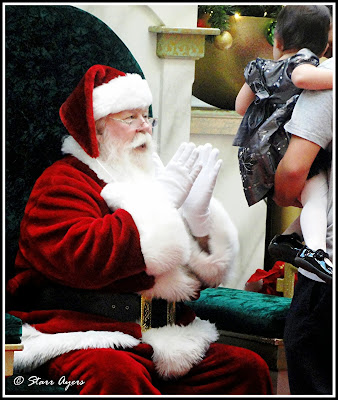 “Let the little children come to me, and do not hinder them,
for the kingdom of God belongs to such as these.
―Mark 10:13, NIV

Santa places presents under the tree.
Children believe.
God placed his presence upon the tree . . .
Come with childlike faith.
Simply . . . BELIEVE!
The true spirit and meaning of Christmas is alive and well deep within the heart of my friend, Santa Cliff. Yes, Virginia! There really is a Santa Claus, and he is praying for you.
In December 2012, fifty years after donning his first Santa suit, Santa Cliff was inducted into the International Santa Claus Hall of Fame in Santa Claus, Indiana. http://ow.ly/ryxYG

You can connect with Santa Cliff at http://www.cliffkringle.com/  His book, Santa's Journey, Sharing Christmas Year Round, can be purchased on Amazon. http://ow.ly/ryy0T
Top photo of Santa (not Santa Cliff) was taken at Four Seasons Mall, Greensboro, NC, 2011
Posted by Starr Ayers at 12:13 AM